My previous post gave a high-level overview of one approach to web application development and testing and the new challenges that came with data engineering. This post describes how new testing solutions evolved to handle these new data engineering challenges.

The ETL tool I’m building forks off of odo, an open-source project for the Blaze ecosystem.

The one really good thing about odo is how easy it is in order to add in different data formats to transform to. There are four primary methods you need to implement to support a new backend:

And that’s it! Your backend is now integrated into your copy of odo and ready for use.

Furthermore, odo.resource and odo.discover are functional already; the same inputs will always generate the same outputs. Suffice it to say that these methods aren’t the testing bottleneck. odo.convert and odo.append are each about as functional as you can expect; the same outputs will cause the same errors, as long as the resources behave in a predictable manner. Additionally, odo.convert calls odo.resource to create an empty instance of the destination format given and then calls odo.append to append to the empty resource – a wrapper method. Really, you only have to worry about one method: odo.append().

So what’s not so great about odo?

First, it’s no longer actively maintained. According to this issue, odo is deprecated and users are encouraged to use intake instead. So for odo users, if you want to merge functionality somebody else made, there is no central place to do so because everyone has their own forks, because nobody is assigned the maintainer role. It’s not a huge problem as it still is very easy to add functionality to odo, but it would have been really nice in order to consolidate some of the effort into rebuilding critical paths for open-source formats like Apache ORC or Apache Parquet.

Second, there is no real test suite that comes bundled in with odo. This matters because as a fork, I expect to be able to use the functionality of my base right out of the box, and as we know from earlier, code without tests is broken code. In production, many pieces of odo lacked tests for numerous edge cases, which slowed down development significantly.

Third, the code is somewhat dirty and the core is not well documented. This wasn’t a huge issue in the beginning because the API meets expectations in functionality and performance, but it makes productionizing the code or iterating on the design abstractions difficult, both of which eventually became issues. For example:

Fourth, the API is a bit loose. Features developed for one resource have to be re-implemented manually for all resources. For example, if you want to implement a feature to set a batch size, to read a set number of records from one location to another at a time, you have to implement the “how” to fetch for every specific resource. odo’s forgiving nature also means that if a feature isn’t implemented, the application does not fail. What ends up happening is continued development results in a mosaic of different features, with the same feature potentially having different behaviors depending on the resource at a specific release. While this doesn’t crash applications and lends itself to patching bugs, it isn’t good for predictable, user-friendly behavior. This can be mitigated by implementing custom decorators, such as odo.batch(), which you can set to hard fail by default.

I can empathize with the original developers why there aren’t any tests. odo comes with a massive suite of functionality built in, which may have been built ahead of any tests and focused solely on functionality for the project to survive. It’s just that it’d be difficult, if not impossible, to test all the permutations at the end. Here’s a visualization of the different types of data transfers possible: 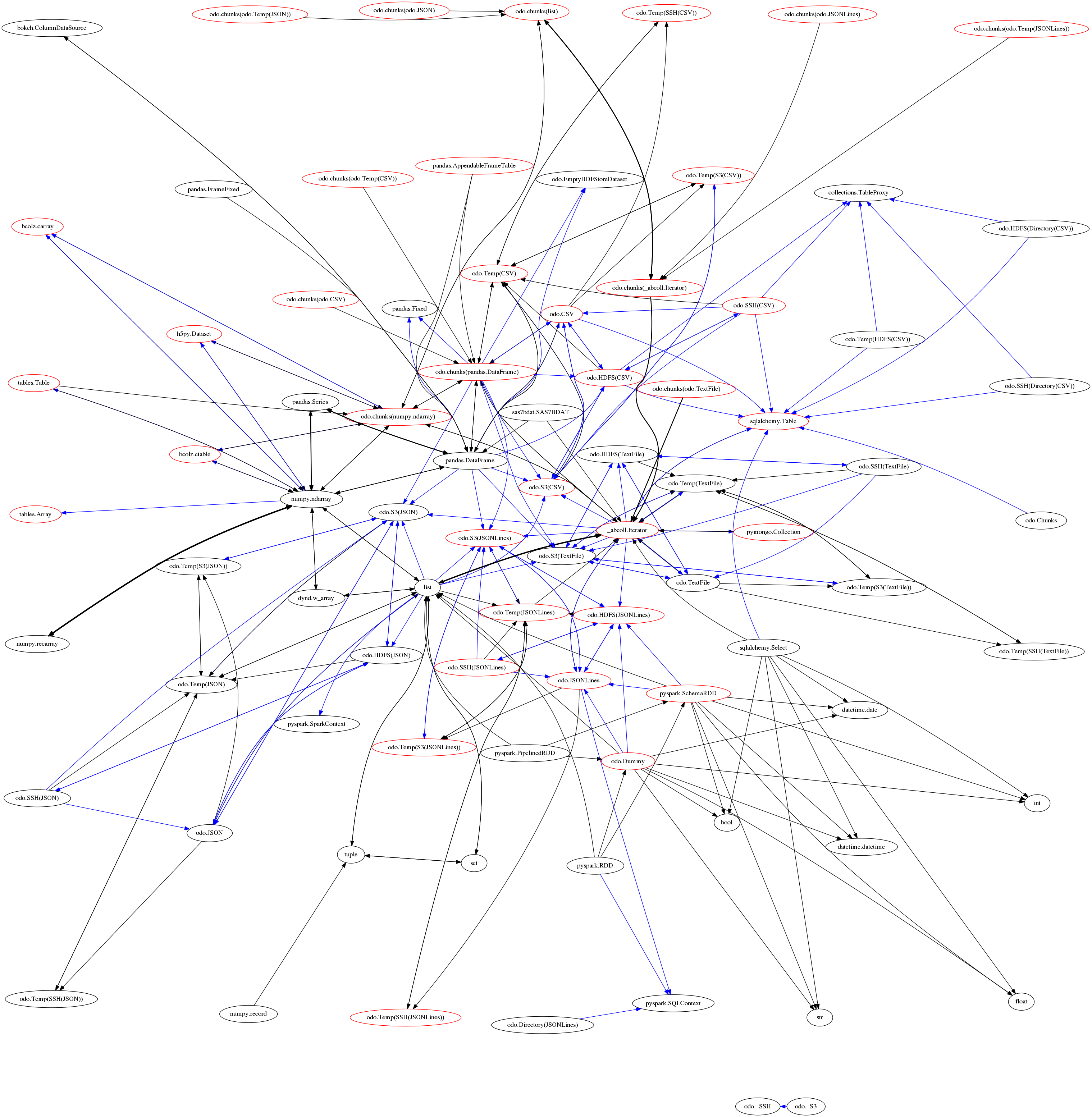 I needed to start somewhere, and I thought I couldn’t go wrong with approaching the problem through a functional lens, so I decided to divide up the problem based on types. I created a number of tests for every type and dependency, and I stuffed them into a harness structure that I thought intuitively made sense. This is available below as Appendix A. pytest loved this format because each test was an individual test function, and pytest could hook onto these and print very nice reports. An example test report is available as Appendix D.

Then the VP of engineering came over, took one look at the tests I had been writing, and mentioned that I wasn’t taking into account other behaviors common to databases, such as primary/shard keys and subsequent record deduplication. Boom new dimension, and unhandled problem. He recommended I come up with a new design for this test harness because migrating the old one again and again would be meaningless and time consuming. I hated to admit it at the time, but he was right. This effort was unsustainable.

Several requirements went into choosing what type of data format I wanted to store my tests as:

All this lent itself to choosing a semi-structured data format, which in my case became json.

One thing I did not know how to do in pytest at the time was how to isolate each test by itself. I could only execute all the tests at once as a single test – which then printed success. The only workaround I had was to log the output as best as I can, and then manually parse those logs by eye whenever I executed the tests. I figured this would be a good way in order to practice writing tests as data, whether or not it worked.

This is of course an unsustainable solution; no person, much less a machine, can parse a stream of logs in order to generate test results, and creating a failure-resistant logging system is its own Herculean task.

I only got a few test cases written (less than ten) before I went stir-crazy and looking for a solution to this mission-critical problem.

This harness structure is available at Appendix B. An example test report is available as Appendix E. I would advise anybody reading to not use a solution like this.

I had listened to the QA team to see whether they had any insights into working with pytest. As luck would have it, one QA engineer found a way to use pytest.mark.parametrize() with metaprogramming. The essence is you create a stub function, into which you pass in some amount of data processed by a special function pytest_generate_tests(). I had not known that you could use the parametrize method in that manner. I did use the method in order to stand up individual resources for each regression in my first generation harness, using indirect=True and passing parameters unique to each test to a pytest fixture.

This solution effectively addressed the concern of running tests individually, and was the cornerstone behind the iterative efforts of establishing data-driven testing.

One other very nice aspect of pytest_generate_tests() is the ability to pass in CLI flags into the execution environment. It’s just argparse underneath. For example, my manager mentioned how having a timestamp as a unique identifier for a given test case would effectively distinguish test cases from each other with little mental overhead and hassle, better than my idea of having unique test case descriptions (as long form text). So in order to run a particular test, you could execute:

And it will filter all test cases to retrieve the unique test case as identified by timestamp. In addition, flags exist to filter by tags (e.g. do not run tests tagged with 'aws' if you have an air-gapped environment and want to verify functionality in production), by transfer type, and others.

I’ve been using this system for about three or four months, and I am very happy with the ability with the amount of code reuse and code deduplication. The major code commitment in the test harness is the comparison logic between any two resources, which is unavoidable. I believe Paul Graham said you picked the right design abstraction if you’re doing new things all the time, and this comes closer than anything else I used. The language-agnostic nature of data means that different services have a single communications medium; for example, a fuzzer or a property-based tester like hypothesis could generate JSON test cases with the same schema and different arguments as a form of automated test-driven development, to increase productivity and maximize developer impact.

Ultimately, ETL boils down to two things: a robust, complete, extensible, and easily mappable type system , and everything else. Ensure that all data formats can map directly or indirectly to and from your type system, and you have a functional ETL pipeline. For example, it doesn’t matter if your type system doesn’t have WKT support, if you can stringify your WKT objects and recognize/parse them at the very end. The problem is that system needs to handle every kind of bad data allowed to exist by your choice of programming language, and there’s many points where that can go wrong (and where some, like those resulting from closed-source software, are out of your power to control). The happy path is very short, sweet, and happy, and the edge paths are dark and full of terrors.